Located in the south-western region of Uttarakhand the city of Rishikesh is enveloped by the Himalayas on three sides. The city is famous all worldwide as the ‘Yoga Capital of world’ and as the ‘river rafting capital of India’. The city is filled with a number of temples and ashrams all set along the banks of River Ganga.

Rishikesh is the gateway to the Char Dham yatra which goes from Yamunotri, Badrinath, Gangotri and Kedarnath. The city is named after the Hindu God, Lord Vishnu. The city has emerged as a major pilgrimage spot of India and as a result most of its economy activities are some way or the other related to the ashrams, temples and meditation centres. 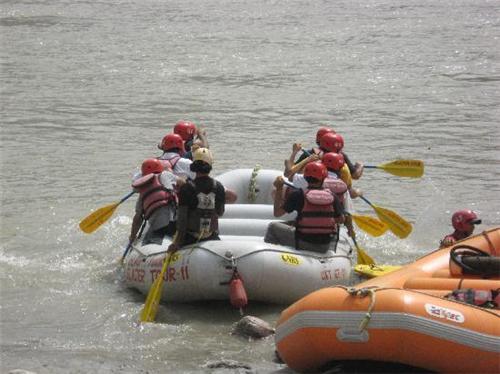 Religion and spirituality is a huge part of Rishikesh. There are many big organizations like the Swarg Ashram and Divine Life society which run trust all around the city as well as outside the city. These organizations also run many hospitals and are entrusted with spreading the work of spirituality all around the globe. There are also many temples around the city which gain a lot of money through the donations made by the pilgrims and tourists. This money is used to run trusts and small huts for mediations. The temples also earn some money by helping the pilgrims with a holy bath in the Ganga River.

Rishikesh is very famous for its gemstones and woodwork. A small trip around the city and one will notice the huge numbers of jewellery and gem shops selling amethyst, sapphire, amber, crystal and other religious stones. There are also a number of wooden handicrafts and statuettes sold in Rishikesh. The labor is employed to produce wooden beads, toys, curios and bracelets. There are also other religious accessories sold by the small huts and shops settled by the Ganga River such as incense and herbs. One can also find a lot of book shops selling religious books on Hinduism, mediation and yoga activities.

Tourism is the primary source of income for the people and government of Rishikesh. A variety of taxis, jeeps, buses, motorboats are employed in providing transportation both local and national for the tourists. One can find public as well as private transportation facilities for travelling inter as well as intra city. The city is also filled with a number of travelling agencies which offer various activities such as hiking, kayaking, rafting and trekking around the city. This is a very competitive market since the city is in-flexed by travelers during the month of June and July.

Tourism has also led to the establishment of major big and small scale eateries around the city. They provide local delicacies of Rishikesh which is liked a lot by the international tourists. There has also been a rise in the number of hotels and lodges. One can easily find a hotel near the many temples and they are available for people of various budgets.

Comments / Discussion Board - Business in Rishikesh