Located in lower regions of the Himalaya, the city of Rishikesh is famous all over the world as the ‘Yoga Capital of world’. The city is also the river rafting capital of India. The city is located in the Tehri Garhwal region in the northern part of the Uttarakhand state. The city is filled with a number of temples and ashrams all set along the banks of River Ganga.

Rishikesh is 240 kms away from New Delhi and easily accessible via road. Elevated at a height of 1360 feet above the sea level the city is a gateway to major pilgrim cities of northern India. 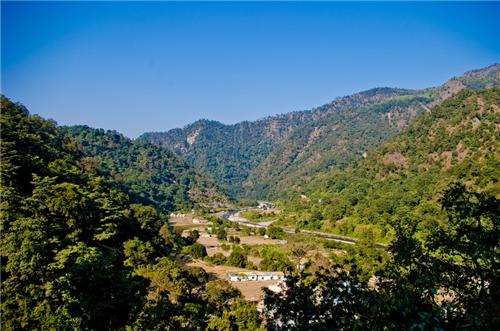 Rishikesh being a city in very close proximity to the major cities of Haridwar and Garhwal, the place is inhabited by a huge crowd who travel frequently to Haridwar or Dehradun. The city has a total population of 102138, according to the 2011 census of India. The city is the 7th most populous city and the largest municipal board of Uttarakhand. The city has a population density of 8851 / Sq. km. Just like the rest of India, males are in a majority in Rishikesh with a total population of 54,466 males for the 47,672 females in the city.

The literacy rate of the city is very high at 86.66 %, which is 12 % higher than the national average. 57 % of the male are literate and a mere 34 % of the women can be counted as literate. 21% of the total population in Rishikesh is under the age of 6 years.

Rishikesh is located at a height of 372 meters. The climate of Rishikesh is influenced very much by its location at the foothills of Himalaya. At an average the days are sunny and the evenings slightly cold. The climate is very pleasant throughout the year for the travellers.

The summer season exists from March to June and the maximum temperature might be as high as 35 degree Celsius and as lows as 20 degree Celsius. Starting from the month of July, the Rainy season or the monsoon is experienced by the city and is concluded only by September. Rishikesh receives moderate amount of rainfall throughout the year. The heavy rain showers 2136.7mm of total precipitation to the city annually.

The winter season is very chilly and lasts for four months starting from October and ending in March. The average temperature is found to be around 8 degrees and always stays below the 20 degrees mark. The winters are the best time to visit the city and the travellers are recommended to carry winter clothes with them.

Type of Soil in Rishikesh

Brown forest soil is found in this region and the soil is very rich organically and is characterized from sandy to gravel type. The soil is very porous. But it is very susceptible to soil erosion.

Geographical Facts and Figures about Rishikesh

Comments / Discussion Board - Geography of Rishikesh