The practice of Yoga has been perfected by ages of yogis, sadhus and mahatmas, as also thinkers and philosophers. The teachers at the Himalayan Yoga Gurukul in Rishikesh have also spent years meditating and working on various forms of yoga asanas. The Gurukul, ensconced in the snow-clad mountains is the ideal teaching grounds in Rishikesh for tapasya or divine propitiation. Yoga sadhana is either instructions from some teacher or the Gurukul giving special sessions of group Yoga interventions. All these sadhus and sadhvis (practitioners) then go forth into the world to share their experiences and distribute the benefits of their learning among all others who were interested in learning yoga. They also look after the needs of those who have the greatest need of their care giving prowess. 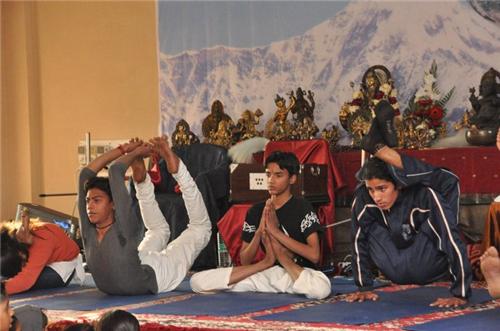 Yoga has tremendous powers of healing and miraculous results have been witnessed among those who have practiced yoga as a way of life. In fact many a times it is hard to believe that the strapping young fellow teaching the various ‘asanas’ may probably be past seventy years.

There are several forms of Yoga being studied, experimented with and imparted training in. Some of the common forms of Yoga are:
All these forms are taught successfully at the Himalayan Yoga Gurukul in Rishikesh.

The founder of the Himalaya Yoga Gurukul or even the Himalayan Yoga Academy as it is popularly known in Rishikesh is Kamal Bhatt. He is one of two brothers who have made yoga their life.

In the late 1990s Kamal Bhatt and his younger brother Bhuwar became interested in all that was dance, rhythm and music. They began having charitable classes for poor children and these gradually grew and gravitated towards Yoga. Their enthusiasm and the children’s willingness to learn yoga as a professional level course laid the grounds for an institution that would impart international level yoga training under personalized care and supervision.

Besides the two brothers there is a third exponent of yoga at the Himalayan Yoga Gurukul. He had been one of the avid students of Kamal and Bhuwan Bhatt and later became adept at the various nuances of yoga. Presently he has also joined the faculty. His name is Naveen Joshi.

Kamal Bhatt has taken yoga learning and teaching to golden heights. He has been awarded the Golden Medal Master in Yoga from the Sanskrit University. The specialization that Kamal has in Yoga includes Hatha Yoga and Stat Karma.

Kamal is an exponent of the classic Hathe Yoga technique of Yoga. This technique requires tremendous concentration and focus. In Health Yoga he has further mastered the art of Shatkarma which is a curative therapy. He has healed several people who were suffering from chronic diseases. They had given up everywhere else and finally sought relief in the Shatkarma course being used as therapy by the Yogacharya Kamal Bhatt.

The third exponent of Yoga at the Himalayan Yoga Gurukul is Yogacharyas Naveen who registered in 2012 with the Yoga alliance as an RYT 200 teacher of Yoga. Along with teaching Yoga to all who come to the Himalayan Gurukul. Yogacharya Joshi is pursuing a masters in Yoga at the Kanvashram Gurukul. His patience and perseverance have attracted many students to his course. They return year after year to replenish their skills in yoga.

The trio of Kamal, Bhuwan and Naveen Yogacharyas are adept at transferring their knowledge, skill and experience in various forms of Yoga to their trainees. The ancient traditions of Yoga have been simplified by these exponents who blend the finer elements of Pranayam, Kundalini and Hatha Yoga techniques and therapies. Having their leadership and tutorials makes for a lasting and rejuvenating experience for all students.

Details of Phone numbers as well as address in India can be obtained here. Following Phone numbers are in serviced from 9.00 am till 11.00 pm Indian time.