The past of Rishikesh states numerous legendary stories associated with this place. It was here in Rishikesh a renowned saint Raibhya Rishi executed penance along the banks of the holy River Ganga. As a reward for his hard self-punishment, God Vishnu came into view in the figure of Hrishikesh and thus the place was looked up with the name Hrishikesh which after that became well-known by the name of Rishikesh. 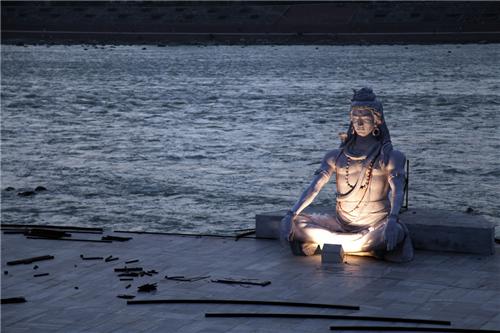 Bharat, the younger brother of the God Rama has also done a tough self-punishment here. This is the motive why the place has a temple known as the Bharat temple. On the other hand Rishikesh turn out to be a famous religious pilgrimage place only in ninth century AD when Adi Shankaracharya came here. Yet there is one more description of history which states that the name Rishikesh has been taken from the word Hrishikesh which is the other name of Lord Vishnu, who killed the devil Madhu here.

The root words 'Hrishik' and 'ish' join together to make Hrishikesh. 'Hrishik' means sentiments and 'ish' means lord or master. Therefore, the word means Lord of Vishnu or Lord of Senses. The Sage Raibhya occupied his senses and attained Vishnu, the defeater of senses. For this reason the place is recognized as Hrishikesh. Though, afterward it was pronounced as Rishikesh.

Another tale says that violent fire bust out here. Lord Shankar was annoyed with Lord Agni and punished him. Then Lord Agni pray here for the forgiveness of his mistakes. Consequently it is also acknowledged as Agni Tirth - the holy place to sacrament of Lord Agni or Fire God.

In medieval age very less people lived here. The people visited here mostly at the time of pilgrimage session. Only few sages and poets lived here. It was enclosed by shrubs of bamboo and mango groves. Many temples were here during the 8th century. The floods in Ganges, iconoclasts and earthquakes destroyed many of them.

Rishikesh the Land of Temples

From the medieval eras, Rishikesh is well-known as the extraterrestrial dwelling. Neelkanth Mahadev temple is supposed to be the place where God Shiva had drunk the poison that came out from the churn of the deep sea. In 1960s, the place came into attention as the place where the pop group came into limelight.

Comments / Discussion Board - History of Rishikesh