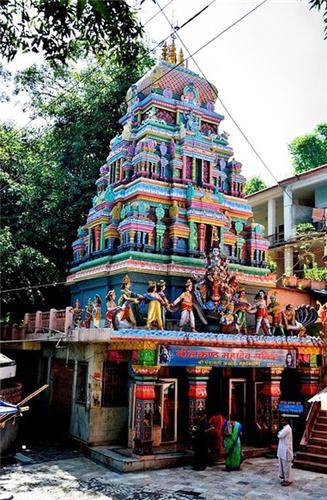 Neelkanth Mahadev Temple in Rishikesh is a Hindu temple dedicated to Lord Shiva, also called as Neelkanth. The temple is about 32 kilometres from Rishikesh and is located at a height of 1330 m.

The lofty temple stands tall with a shikhara that has scenic sculptures depicting the churning of the ocean with devtas and asuras wrestling with the snake Sheshnag wrapping himself around the mountain and then turning it around to bring out the treasures of the ocean. During the end when the two team were near obtaining the nectar of immortality or ‘Amrit’ they brought out a pot of sheer lethal poison called ‘Halahala’, which Lord Shiva volunteered to drink. Lord Shiva consort, Parvati, was worried about his health and decided to intervene. Thus, when Lord Shiva began drinking the fatal poison, Parvati put her hand on his neck. The poison was held up at the Lords neck and till date his neck is blue which is why he is also called ‘Neelkanth’. The temple commemorates the event and its location.

Although a number of the temples dot the Himalayas, the Neelkanth Mahadev Temple is a gem among them all. It has a natural spring within the temple complex. Most pilgrims take a sacred bath in this spring before paying homage to Lord Shiva in his sanctum sanctorum. The embodiment of the Neelkanth Mahadev Temple is in the form of the Shivaling. The temple's location is amazing, ensconced among the lofty snow-capped peaks and verdant green forest of the Himalayas.

The Neelkantha Mahadev Temple is surrounded by three lofty peaks called the Manikoot, Vishnukoot and Bramhakoot. They are symbolic of the mythological trinity of Bramha, Vishnu and Mahesh. At the foot of these peaks run the Madhumati and the Pankaja rivers. The location of the temple is idyllic and breathtakingly beautiful. Just as it is pristine peaceful and serene.

There are two major festivals held in the Temple. The first is held to commemorate Maha Shivratri or the night Lord Shiva was born and the Shraavan Shivratari when the Lord married his consort Parvati or the Mother Goddess. Then there is the time gap, its significance and certain rituals attached to both the festival. The Maha Shivratri held in February-March and the Shivratri of Shraavan or monsoon (July-August) are celebrated differently.

It is the month when the ‘Dak Kavad’ caravans are started. The ‘kavadiyas’ are groups of young men who pledge to bath the Shivlingas of their respective village shrines with the waters of the holy Ganga river from Haridwar. The Kavadiyas are enthusiastic young people who take on various penances and carry beautifully decorated palanquins with the water containers all the way to and from their villages to Haridwar and back. Thousands of devotees visit the Neelkanth Mahadev temple during these festivals.

Just about two kilometers from the Neelkanth Temple is the Parvati Temple located directly above. Near the temple at an easy walk of about two kilometers it is interesting to note is a cave or ‘gufa’ that also houses a small temple. The view along the way is scintillatingly picturesque.

Lord Shiva has a unique way of being appeased. Lord of Nature - he loves all that is natural and sets great store by all that is part of nature’s bounty like gangajal or waters of the Ganga, flowers, Bael leaves, honey, milk, coconut and simple fruits. Even when people fast ritually they can partake of nature’s bounty which is wholesome and healing all at once.

There is a series of three caves near the Mahadev Neelkath Temple. They differ in size and proportion from each other. One of the caves is known as Jhilmil Gufa because Guru Jhilmil had meditated there for several years.

The largest of the caves is devoted to Guru Gorakhnath. It is said to have been discovered by Saraswati Nijanand Swamiji who claimed to know the history of 150 years of the Gufa’s history.

The third cave had the Guru of the king of Uttar Pradesh meditating in it. The kings name was Alha Udal and his Guru was Shri Shailesh Giriji.

How to Reach the Divine Neelkanth Mahadev Temple

There are excellent arrangement for travel and include travelling by road (taxi, bus, own vehicle and even autos or three wheelers.) is ideal for travelling in the Ganga waters.

The private and Government services of cars, taxis and buses are fairly adequate and reasonably priced. A taxi takes Rs. 4000/- approximately for a four seater car from new Delhi to Reshikesh. One can put up at an ashram at Haridwar and travel by auto to Rishikesh and from successfully having completed the journey be ready to travel to the Mahadev Temple as well as the Parvati Temple together.

Best Time to Visit: Though you can visit Rishikesh any time of the year, the right time would be during the months February-March, August-October. The temple is open on all days from 6.00 a.m.-9.00 p.m. and will take an hour to complete the visit of the temple. Entry fees are not charged and photography not allowed inside the temple.

Here are some of the hotels near Neelkanth Mahadev Temple in Rishikesh.